Guide to Industrial Valve Applications in Northern California and Beyond

Northern California refineries depend on reliable components to keep oil and gas flowing, and valves are some of the most important. There are several types, and knowing their differences is essential to choosing the right ones for your industrial valve applications.

Valves come in a variety of configurations, and each type has its advantages and disadvantages. The specific type used for a particular industrial valve application depends on the functionality needed as well as the pressure and other parameters of the system. This guide will discuss the basics of valves, including eight common types found in Northern California refineries and the industrial valve applications for which each type is used. 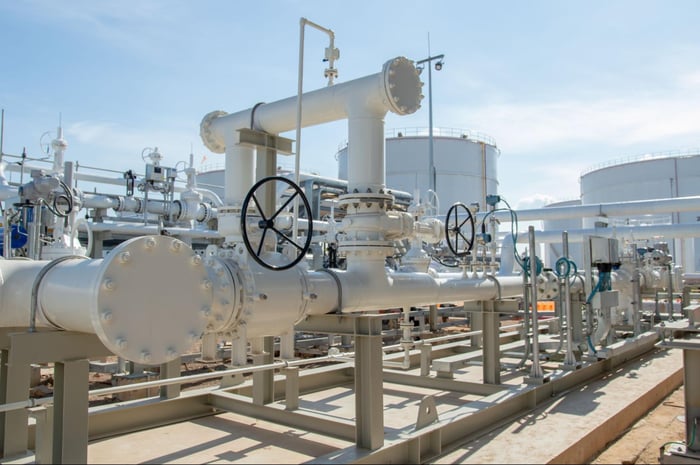 Though they can differ considerably in their mechanisms of action, all valves have the same basic function: to regulate the flow of liquids or gases through a pipe. They may be used to stop or start flow completely, adjust the amount, control the direction, or regulate pressure, and they may function by opening, closing, or obstructing an aperture.

When selecting a valve, the first question to ask is what do you want the valve to do? In refineries, valves have five main functions:

There are several different valve mechanisms that perform these functions, and it is important to use the right type for the application. It is not uncommon to see valves used incorrectly—for example, a ball valve used to throttle flow. While a misapplied valve may work adequately in some conditions, it can lead to catastrophic failure in others. In a high-pressure gas system, for example, the sudden burst of gas-enabled by the fast opening of the valve could ignite and start a fire.

In refineries, the three most common valve types by function are isolation valves, control valves, and check valves.

The simplest and most common valve function is stopping and restarting flow. These valves are called isolation valves, and they are designed to operate in either the fully on or fully off position. Some types include ball, gate, and diaphragm valves.

On-off valves provide a quick shutoff and high flow capacity. They usually have fairly simple mechanisms, making them less expensive than more complex valve types. Because of their simplicity, reliability, and low cost, they are commonly found throughout all industrial valve applications, including in oil and gas.

Control valves are used to regulate a system’s flow rate, pressure, and temperature by varying the size of the flow passageway. They are usually operated by a hydraulic, pneumatic, or electrical controller for precision. Automatically actuated control valves are essential to regulating the fluid system parameters in any refining operation.

Check valves have mechanisms that allow flow in one direction but not the other. They are often used to protect equipment that could be damaged by backflow and to prevent cross-contamination. They are also used to reduce chatter within pipes.

While there are only a few different functions that valves fulfill, there are several types of valves with different mechanisms of stopping, starting, and controlling flow. Below are seven of the most common types of valves used in Northern California refineries: ball, butterfly, diaphragm, gate, globe, needle, and plug valves. 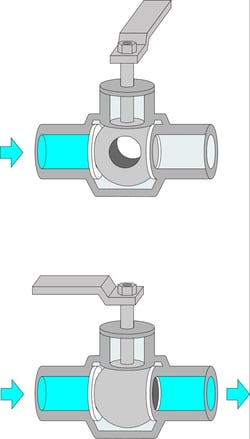 Ball valves are the most common of all valve types. They are designed for quick on-off functionality with tight sealing.

A ball valve consists of a metallic ball with a large hole through its center, which is actuated by a quarter-turn handle. When the handle is in the on position, the hole is lined up with the flow path, enabling flow. When turned 90 degrees to the off position, flow is stopped.

Ball valves are best used in the fully open or fully closed positions, as they do not allow precise control over the rate of flow. 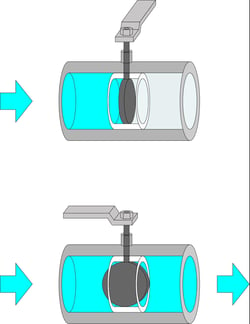 A butterfly valve is another type of on-off valve that uses a disc attached to an actuator to stop and start flow. As with the ball valve, a quarter-turn of the actuator rotates the disc to block flow.

Butterfly valves are lightweight, compact, and simple in construction. They shut tightly, allow easy flow, and can handle high pressure. They are often used as shutoff valves in large-diameter pipes.

Diaphragm valves have flexible membranes that block flow when actuated. The membrane completely isolates the actuator from the process fluid, making diaphragm valves useful when corrosive fluids could damage metallic parts of the valve. They are usually used for liquid service.

Diaphragm valves’ primary advantage is their ability to seal off the fluid from the rest of the valve, preventing contamination and corrosion. The disadvantage of diaphragm valves is that because of the elastomeric diaphragm, they tend to have a much shorter lifespan than simpler valve designs. 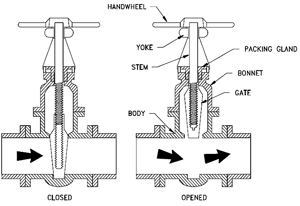 Gate valves are another extremely common on-off valve. A gate valve uses a plate-like barrier that is lowered into the flow stream to stop flow. They are mechanically similar to globe valves, but the gate mechanism creates less flow restriction than a globe valve plug in the fully opened position.

Like other on-off valves, gate valves should be operated in the fully open or fully closed position and not be used for flow control, as the gate can be damaged if left partially open. 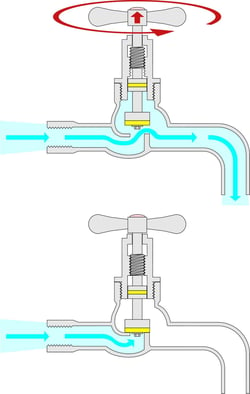 While the above valve types are all meant for on-off operation, globe valves can also be used to regulate the rate of flow. A globe valve contains a plug that is raised and lowered similarly to a gate valve. It can be used to stop and start flow, or it can be partially opened to throttle or adjust flow.

The most common globe valve design is the Z-style valve, which refers to the two 90 degree turns the fluid must make through the valve body. This design means globe valves tend to create more pressure drop than other valve types. 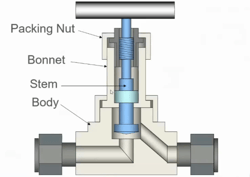 Needle valves contain a small port and a threaded, needle-shaped plunger. The threaded actuation allows very precise regulation of flow; however, the tight design is only capable of relatively low flow rates. Needle valves are used to regulate flow rate when precise control is needed.

Needle valves allow precise and reliable flow control. They are most commonly used in flow metering applications, especially when a constant, calibrated, low flow rate must be maintained. 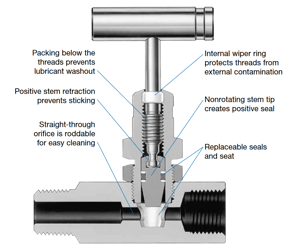 A plug valve constricts flow similarly to a ball valve, but it uses a cylindrical or tapered, ported plug rather than a ported ball to constrict or allow flow. Like a needle valve, it can have a threaded plunger that allows precise control over the flow volume. They can also be quarter-turn valves, which is useful where quick and frequent operation is essential. Plug valves are used for both on-off function and flow control.

Plug valves can have multiple ports. The most common type of plug valve has two ports with an open and closed position and is used as an on-off valve.

Plug valves can be either lubricated or non-lubricated. Lubricated plug valves have a lubricant injected between the plug and valve body to act as a sealant, which prevents internal leakage, protects the valve from corrosion, and makes it easier and smoother to operate.

With so many types of valves, it is important to leverage the expertise of an expert in industrial valve applications who can help you choose the optimal valve types for a process based on the functionality desired. Using the right type of valve can improve your system efficiency, reduce maintenance costs, and maximize the lifespans of your valves.

Swagelok has decades of experience engineering and implementing the top valve products in the industry. We’re proud to be a part of helping refineries and petrochemical plants in Northern California, and beyond, improve the reliability of critical components in industrial valve applications. We’ll work closely with you to understand your specific process requirements, and we’ll make sure you get the valves you need to keep your operations running safely and reliably.

To find out more about how Swagelok Northern California can help you with industrial valve applications, contact our team today by calling 510-933-6200. 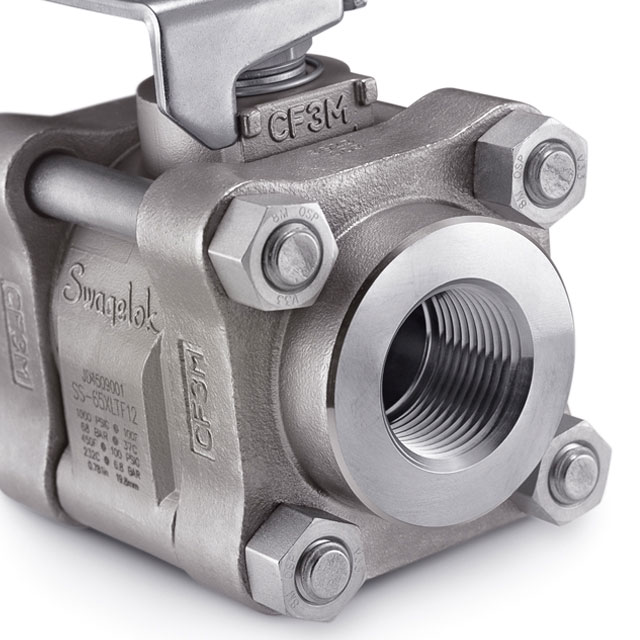 Available in a variety of standard materials and end connections. Offered in high flow and quick-quarter turn manual or pneumatic actuation. Engineered for repeatable, leak-tight shutoff. Low overall cost of ownership. Can be manufactured or configured to a wide range of specifications. Fill the form to get details. 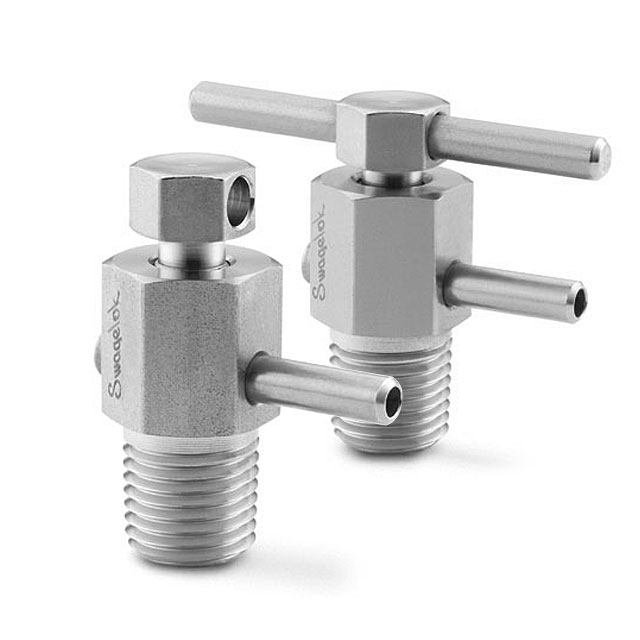 Designed to safely bleed system pressure prior to maintenance, removal of an instrument, or when calibrating control devices. Knurled caps permanently assembled to the valve bodies to enhance safety. Fill the form to get details by email. 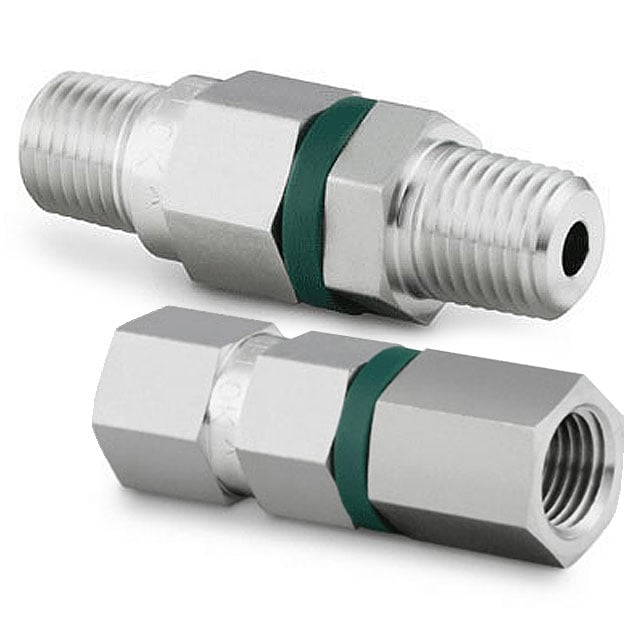 Stop the uncontrolled release of system media when a downstream line ruptures. Reset automatically when pressure is restored. Reduce maintenance time. Eliminate the need for complex bypass mechanisms. Fill the form to get details by email. 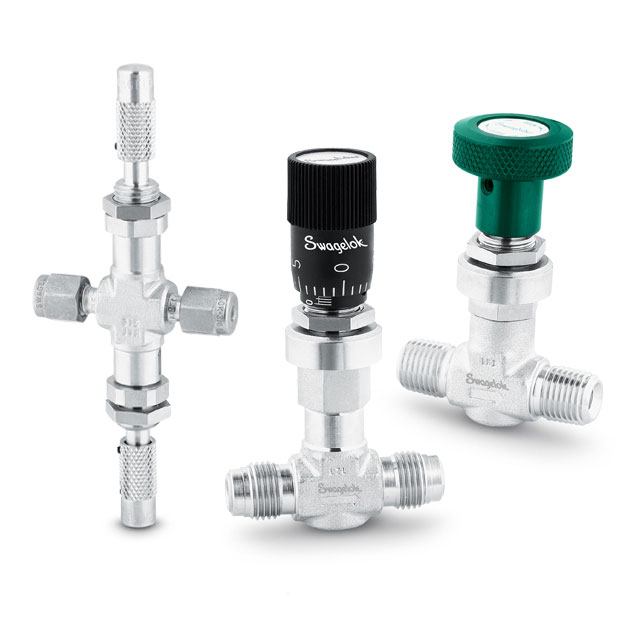 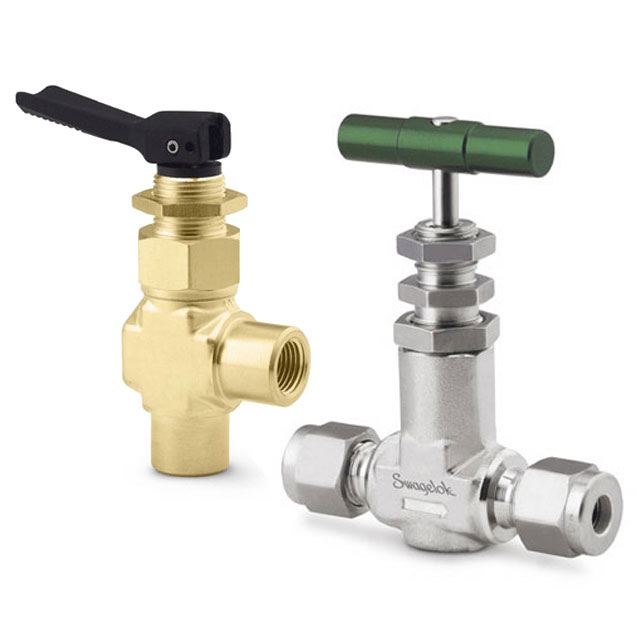 Swagelok offers a broad line of needle shutoff and regulating valves to control flow in general- and severe-service applications. Reliable and consistent flow control. Offered in a variety of materials, sizes, and end connections. Engineered to withstand corrosive and extreme conditions. Fill the form to get details by email. 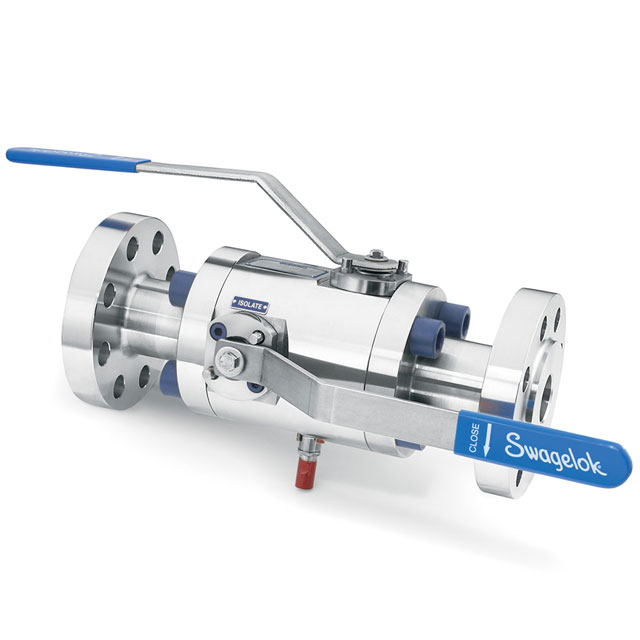 Efficient transitions from process piping systems to instrumentation systems in a single configuration with fewer potential leak points. Lower installed weights and smaller footprints compared to assemblies featuring multiple valves and fittings. Fill the form to get details by email. 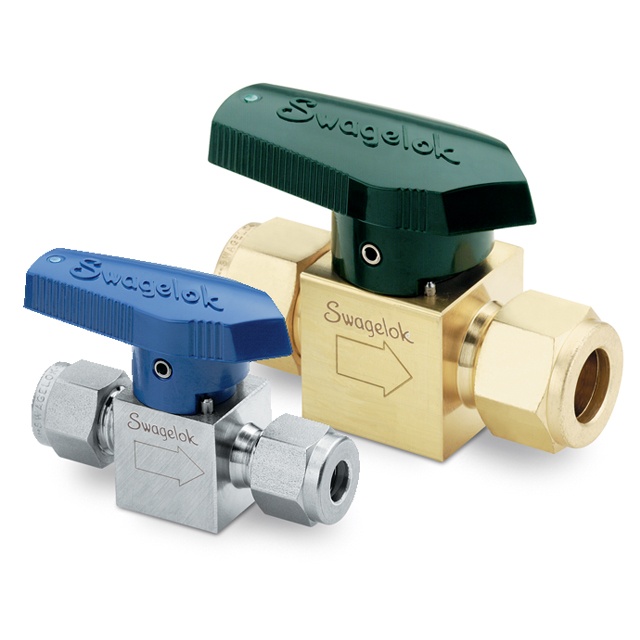 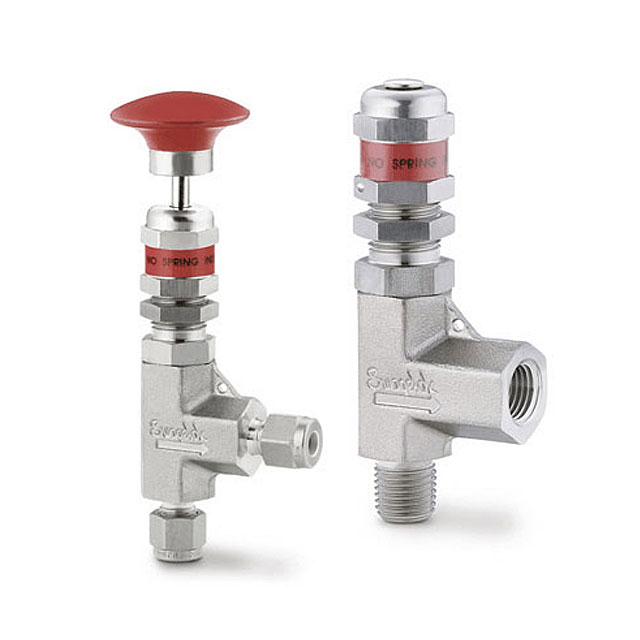 Provide simple, reliable, over-pressure protection for a variety of general-industry applications. Have easy external set pressure adjustment. Fill the form to get details by email.

Need information, support, or a quote?