"Blowing off a little steam" may be good for people, but it's bad for steam systems 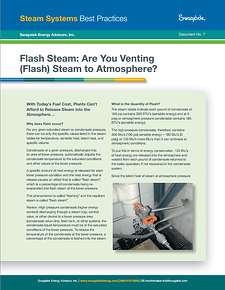 Are you venting (flash) steam to atmosphere? Read and download this best practice to find out how much it might be costing you »

Steam follows certain rules of temperature and volume. For instance, consider what happens when high-pressure condensate is discharged into a lower pressure area such as a condensate return line, a flash tank, or some other system. The steam travels from one environment to another through a steam trap, a control valve or some other device. As it enters the lower pressure environment, heat energy is released, causing some of the condensate to re-evaporate into steam. This release is called “flashing,” and the resulting steam is called “flash steam.”

There are ways to recover flash steam. A lot depends on whether you have a modulating or non-modulating steam system. We'll cover each set of circumstances in future posts in this series. In the meantime, it pays to understand flash steam.

Click here to read the complete steam system best practice: Flash Steam: Are You Venting (Flash) Steam to Atmosphere? and download a free, illustrated, three-page PDF of this best practice on flash steam. It includes the mathematical formulas to help you figure out what flash steam is costing you.