Video: Another Way To Deal With The Supply Pressure Effect

Two-stage reduction does the trick, and can be done in two different ways

"For lower flow applications an alternative method of regulating supply pressure effect is to use two-stage pressure reduction. "

As we explained before, the falling pressure from the cylinder isn't providing enough force for the internal elements of the spring loaded pressure reducing regulator to do their job as efficiently. We also explained how a model with a balanced poppet design will yield better results.

But there's more than one way to approach the problem. For lower flow applications, another alternative to keeping SPE in check is two-stage pressure reduction. You can do that by putting two one-stage regulators in series, or using a two-stage regulator in a single assembly. The first stage regulator controls the inlet pressure variation to some degree, and the second one smooths it out even further. Together they keep the outlet pressure very close to the target.

Remember, manufacturers typically provide an SPE chart showing the effect at various flow coefficients, expressed as a percentage or as a ratio. So a regulator with an SPE of 1 percent will see the outlet pressure rise 20 psig when the inlet pressure drops 2000 psig.

Watch the short video below to see how this works. 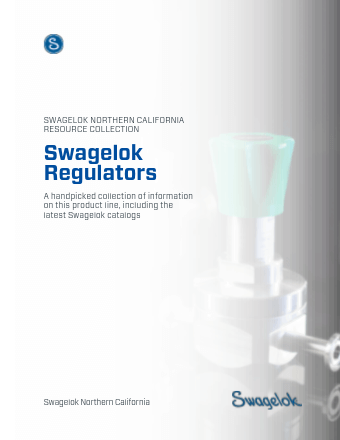 Don't make the costly mistake of putting a two-stage regulator near the gas supply. That would create the effect of three-stage regulation.

Now that you've watched the videos, here's your chance to talk with a Swagelok Northern California expert. Contact him through our regulator consultation page, and he'll walk you through your choices for keeping SPE under control.