Which Pressure Regulator Should You Choose for Corrosive Applications?

Even within a given type of regulator, there are options that make big differences

"Regulators are highly technical, highly specialized fluid handling components. So, the next time you need one please do not just grab one out of the supply cabinet and install it with the vague sense that it will work."

In any application with even the smallest mix of corrosive gases or liquids or aggressive environmental conditions, you should consider using a stainless steel pressure regulator. But that's only the start of the process. There are several types of regulator, and within each classification there are additional choices, such as piston versus diaphragm, and whether you want a two-stage regulator or a one-stage regulator. Even then, it's wise to consider the materials used in critical components, such as the diaphragm and the poppet seat.

Let's start with the basic choice in pressure regulators. Most common applications require a pressure-reducing regulator, which drops the inlet pressure to a relatively constant outlet pressure.

In some cases, the reverse may be required. That is, a back-pressure regulator would be used to mechanically control the outlet pressure, so that a relatively constant pressure is maintained at the inlet.

There's also a third option, which is a vaporizing regulator. This is a pressure-reducing regulator used either to prevent a phase change or to induce one. The regulator uses a steam or electric heating element so that the regulator won't freeze up if a rapid pressure drop causes a gas to lose a large amount of heat. In other cases, the heat is applied to vaporize a liquid for analysis, typically in a gas chromatograph. 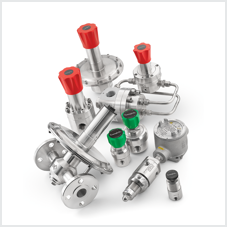 One-stage pressure-reducing regulators are sufficient in most applications where the inlet pressure is relatively constant.

While a two-stage regulator is handy, two one-stage regulators may work just as well or better in some applications. One example is a cross-over arrangement, where two gas cylinders feed one point of entry, with one-stage regulators located off each cylinder. One cylinder is used until its pressure drops below a certain point; then, the other cylinder starts to be used. An additional regulator (often referred to as a line regulator) is located at the entry point to the system, so at all times the gas is passing through two regulators.

Diaphragm regulators generally are the most sensitive to changes in pressure, especially in low-pressure applications.

Piston regulators are generally used in higher pressure applications although they may also be used at lower pressures. In a piston regulator, pressure is controlled by means of a spring-loaded piston, which is a cylindrical metal component that is placed in the vertical cylinder of the regulator. The piston seals against the cylinder walls by means of an O-ring. The thickness of the piston, along with the O-ring seal, allows a piston regulator to achieve higher working pressures than diaphragm regulators.

“Droop” and “creep” are two undesirable conditions. Droop occurs when more flow is required at the outlet than the regulator can provide. Creep occurs when the poppet or diaphragm is in the closed position, yet the seat allows pressure to escape to the outlet side. It generally occurs because the seat may have been damaged, contaminated or eroded.

With stainless steel regulators for high-purity applications, particular attention should be paid to the materials of construction. For the diaphragm, 316 stainless steel may not be sufficient, and an alloy such as X-750 may be more appropriate.

Likewise, the poppet seat is critical. A harder fluoropolymer is not as forgiving and will not seat as well as a softer material. On the other hand, the harder material will be more resistant to abrasion.

Once you've decided on the type of regulator you need, pay close attention to its construction, including the quality of the shell seal, ease of stem adjustment, diaphragm/piston seal, integral filtration, and poppet seating.

As always, the staff at Swagelok Northern California is glad to explain the inner workings of any of our regulators so that you can make the most educated decision. You can even request a consultation with our pressure regulator specialist.

If you'd like a more detailed look at the subject in the meantime, download this article by Bill Menz, General Manager, Swagelok Hose Services Group.

Swagelok Northern California has a great deal of exposure to all aspects of fluid system design and engineering. Whether you have a simple question or a complex challenge, we're glad to hear from you.