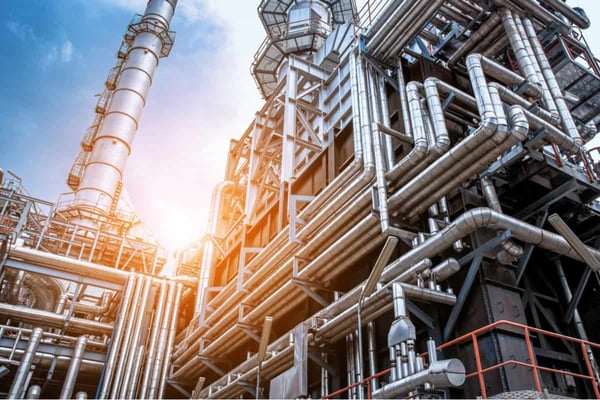 Northern California refineries rely on dry gas seals to supply nitrogen at the correct pressure and flow. Failure of the dry gas seal faces may result in damage to the seal, a buildup of pressure from other gasses not being properly released, and eventually damage to components throughout the system. Ultimately, this could result in shutting down refinery operations as well as additional risks of gasses being released into the atmosphere. The continual and optimal flow of nitrogen gas is a concern that operators need to constantly monitor.

There are several reasons that the flow of nitrogen gas may not be optimized. Issues with components throughout the system could be preventing the appropriate flow of nitrogen gas or result in leaks of nitrogen. A decrease in outlet pressure could be caused by an increase in flow rate through a pressure-reducing regulator (an issue known as “droop”). The inverse relationship between inlet and outlet pressure (known as the supply-pressure effect) might be substandard.

To compensate for such issues, operators may set nitrogen flow higher or lower than optimal to prevent the risk of seal damage and operational issues. This too has its own issues; operations have additional waste, costs are higher to replace nitrogen tanks more frequently, and, conversely, the overuse of nitrogen leading to depletion of nitrogen tanks may increase the chances that operations are running without high enough flow of nitrogen (and result in the ensuing damage to seal faces).

In this article, we will examine the importance of nitrogen gas to critical refinery operations and the reasons for suboptimal nitrogen use in operations.

The Importance of Nitrogen Gas in Refinery Processing

The optimal flow of nitrogen is mission-critical for seals to operate effectively and reliably. Seals have two faces—the stationary face and the rotating face—that ideally will operate with limited wear during usage. To achieve this goal, pressurized gas is moved by grooves on seal faces to flow into a small gap between the seal faces. When between the two faces, the gas increases the pressure between the faces and causes the faces to separate. This prevents the seal faces from touching and rubbing and prevents damage to the seal. Though nitrogen is not the only gas used as a separation gas for seals, it is the most widely used and preferred gas option due to its favorable safety profile (other gas options may be more combustible or toxic and thus create other issues).

Nitrogen gas may also be used as a barrier gas. In refinery operations, when there is a labyrinth with the seal, the nitrogen gas prevents other gasses from leaving by a pressure differential within that labyrinth. This prevents the leakage of sometimes toxic or environmentally damaging gasses into the surrounding atmosphere.

Problems can occur when there is poor nitrogen flow. If the seal faces are not properly separated during operations, there will be increased contact between the faces and damage will occur to the seal. Further, the seal may not fully separate and pressure may build up beyond the maximum pressure rating of components throughout the system and result in damage to these components.

With these factors in mind, we will now discuss the potential causes for suboptimal nitrogen usage.

Several issues during operation may result in suboptimal nitrogen usage. These include component issues and operator errors.

Impurities and Contaminant Issues in the Nitrogen

Nitrogen must be dry and clean to achieve the correct pressure and flow across the seal. Impurities and contaminants in the nitrogen will damage the seal and may result in an overuse of nitrogen to achieve the necessary force to separate the damaged seal.

Poorly implemented control valves may impact the amount of pressure and flow achieved with nitrogen gas. A control valve that fails to regulate the flow of substances results in inefficient processing and a build-up in pressure or temperature. This may ultimately result in damage to pipes and upstream components necessary to efficiently release nitrogen into the system.

Components of a dry gas seal support system need to be fully integrated to limit nitrogen inefficiency in the system. The pressure, flow, volume, and temperature of the gasses used in production need to be properly controlled. Monitoring processes need to alert operators when gas leaks occur. Filtering of seal gas needs to properly prevent contaminants from entering the system. Issues with any components of the dry gas seal support system may result in additional wear and tear on components and waste of nitrogen gas.

A common inefficiency in operation is operator overuse of nitrogen gas. Operators may believe that by increasing the flow of nitrogen gas that they can ensure proper separation of seal faces. However, in a well-maintained and fully integrated system, this is costly, wasteful, and creates additional pollutants. In addition, it more quickly depletes nitrogen tanks and increases risks that operators were initially trying to avoid; that is, issues of lack of nitrogen in the system resulting in damage to seal faces.

The potential causes of suboptimal nitrogen usage are varied. However, when utilizing a fully integrated system at the proper specifications, it can be limited. Consulting with an expert on how to successfully integrate a seal support system can help prevent suboptimal use of nitrogen.

The reasons for overusing nitrogen at refineries can be related to a lack of a fully integrated system, leaks and damaged components, and operator use. Luckily, these issues can all be mitigated when working with an expert in dry gas seals and integrating system operations. By working with Swagelok, manifolds, control valves, and dry gas seals can be updated based on your specific operational needs. A Swagelok Field Engineer can work with your team to determine the most efficient release of nitrogen to keep seals running smoothly as well as to limit quick depletion of nitrogen tanks.

To find out more about how Swagelok Northern California can help with mitigating nitrogen gas consumption at your plant, contact our team today by calling 510-933-6200.