"Maintaining a representative sample is tricky. There is no alarm that goes off in an analytical system announcing that the sample is unrepresentative. The only way to uncover the problem is to be
familiar with the usual tripping-up points. Fortunately, all of them
are avoidable or correctable."

If you want your analytical instrumentation system to give a reliable picture of the fluid in the process line, you need a good sample. If the sample gets altered anywhere in the process, the data from the analyzer won't be useful.

Assuming the sample is properly taken at the tap, it may fall victim to a host of problems:

It’s important to understand the difference between mixing volumes and deadlegs. They are not quite the same. A mixing volume is a reservoir with a separate inlet and an outlet, such as a filter or knockout pot. Fluid may flow slowly through a mixing volume, but it flows. A deadleg is typically a tee formation with a block at the end so there is no through-flow. Deadlegs can include pressure gauges, transducers, lab sampling valves, and relief valves.

You can calculate the rate at which a mixing volume will flush out an old sample, but that's not true with a deadleg. A deadleg holds the old sample, allowing a small portion of it to mix with the new sample, contaminating it.

Deadlegs are unpredictable. They may eventually clean up or not. Generally, deadlegs become a bigger problem as the ratio of length to diameter increases. In addition, lower flow in the analytical line increases the deadleg’s effect. 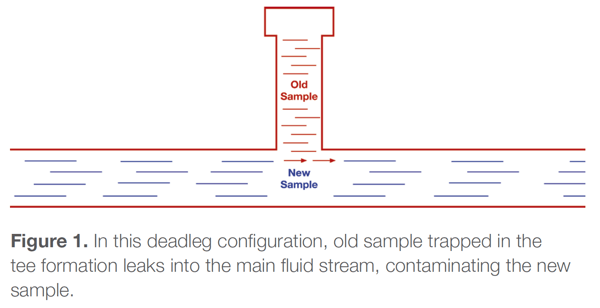 It's best to pick a design that eliminates (or at least minimizes) deadlegs. You can, for instance, remove deadlegs to a bypass loop upstream or downstream of the point where flow is diverted to the analyzer. You also might replace a tee and two-way ball valves with three-way ball valves. You can make sure that a component's end connection minimizes the length of the deadleg. Beyond that, use high flow rates whenever possible.

In addition to deadlegs, some components have “memory.” That is, they have a lot of surface area (such as filters) or permeable materials (some regulators, for example). So instead of putting one filter after the stream selection system, it would be better to purchase multiple filters and locate them before the stream selector system, one in each of the multiple lines.

A less subtle point about component placement concerns the use of the double block and bleed configuration, which consists of two block valves and, in between them, a bleed valve running to a vent. There's a good reason why this has become a standard in the industry: It guards against contamination between fluid streams.

All fluid system components leak because no seal is perfect and all materials are subject to permeation, even stainless steel. In many cases, the leak rate is too slow to matter in an analytical instrumentation system, but not always.

High-quality fluid system components, including valves, are rated to certain temperatures and pressures, and these ratings are published and available. Valves are rated not only for leaks across the seat (internal leaks) but also for shell leaks (external leaks), which are leaks from the inside out.

Permeation is not always an issue. A small amount of oxygen leaking into the sample may not matter, depending on the application. When permeation is a potential issue, the system designer should avoid O-rings, elastomers, and PTFE. Instead, employ stainless steel and metal-to-metal seals wherever possible. Another possibility is to enclose the sampling conditioning system or other parts of the system in a nitrogen-purged box.

Some pneumatic valve designs allow for leaks or permeation between the sample and the actuation air. The valve body and the actuator may be contained in the same block, separated by only a single seal, such as an O-ring. If this single seal were to fail, molecules from the pneumatic air could leak into the sample, or vice versa. Such leaks may lead to a bad analytical reading or, worse, a fire or an explosion. When employing actuators integral to the valve design, look for valves with double seals as well as safety provisions, such as a vented air gap, which allows air or process leaks to safely escape. 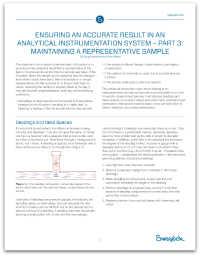 Adsorption is the tendency of molecules to stick to solid surfaces, including the insides of tubing. Some molecules, like nitrogen and oxygen, are easy to dislodge. Other molecules, like water and hydrogen sulfide, stick to tubing and hold tight. Sticky molecules will not show up in the analytical reading for some time.

If the molecules being measured make up more than 100 ppm of the sample, adsorption will probably not matter a great deal. At a lower concentration, however, adsorption must be addressed. An electropolished surface on the inside of the tubing or a PTFE lining will provide marginal improvements in the adsorption rate. Another option is silicon-lined tubing.

Depending on temperature and pressure in the system, molecules in the sample may assume different phases – solids, liquids, or gases, or a mixture of these.

The challenge is to maintain pressure and temperature that will preserve the entire sample in one phase throughout the analytical system. For a gas sample, the simplest solution is to install a regulator, which will lower the pressure. In addition, sample lines can be heated and maintained at the high temperature with insulated, bundled tubing.

Liquid samples are a tougher challenge. A pump can raise the pressure and chillers may be installed. Unfortunately, neither pumps nor chillers are especially easy components to install and maintain.